The Mediterranean climate, with its mild winters and dry and hot summers, has always fired the imagination of true hedonists and experienced travelers.
Extraordinary stretches of coastline, open spaces, azure blue skies, sunshine and sea with its range of tones, form the perfect background for architectural design. Nature and architecture are merged in shaping an eternal sense of tranquility.
The magic spot where the land ends and the sea begins has always inspired true artists to express their humble admiration for the shifty border rapturously dancing in submission to the ruling forces .

People have always been fascinated with the sea, or with water in the broader sense. All the world’s largest cities are developed near the sea or the river shores. Water areas served the economy and transport, but they also represented the aspiration to be in direct contact with nature. The coastline is often a gathering spot,and waterfront is in the center of many Mediterranean towns, wheras on the mainland, the rivers that wind through the cities are often the beating heart of those urban areas. For these reasons, shaping the foreshore has always been a major challenge for both architects and designers, as well as for the society as a whole.

The Italian word lungomare, in its most common interpretation, symbolises the path that extends along the coast. It could be translated ”coastal promenade”. The Italian language provides two similar coins – lungolago and lungofiume, in which the sea is substituted with the lake or the river.

Lungomare is typical in urbanized coastal areas, and in the middle of the 19th century we see its development as an urbanistic and architectural concept. The conception of the first lungomare is correlated to the emergence and development of the tourism globally, particulary in the Mediterranean.
One of the most famous seaside promenades is definitely the one which leads from the town Bol to the beach Zlatni rat.

Bol is the oldest coastal town of Brač. In the secluded southern landscapes, it is the central part of the island, at the foot of the Bol crown and Vidova Gora, extending a couple of kilometers alongside sea edge.
This area is gently sloped towards sea, with beautiful pine forest, and some remarkable more than a hundred years old pine trees on the edge of the plateau. Due to the uniqueness of the landscape and its accentuated natural characteristics, it has always been a practice to respect this terrain as much as possible, therefore massive objects have not been designed there (neither vertically nor horizontally),on the contrary, the masses cascadingly descend towards the sea.Kovačić’s pavilion system, enhanced by the elements of white roof architecture and the Mediterranean motifs scenery today serves as an inspiration for younger generations of architects.

This is why, in honour of Dinko Kovacic, we seek arangement and measure: the arangement between modernity and tradition, the measure between pleasure and happiness. Macrolocation of the beach Zlatni rat is among the most sensitive but at the same time the most intriguing ones on the Adriatic. Walking along the seashore in Bol accompanied by the smell of the sea air is a pleasure in itself and a truly remarkable experience.

Today we celebrate that special moment, that specific emotion and we look forward to the rising summer. 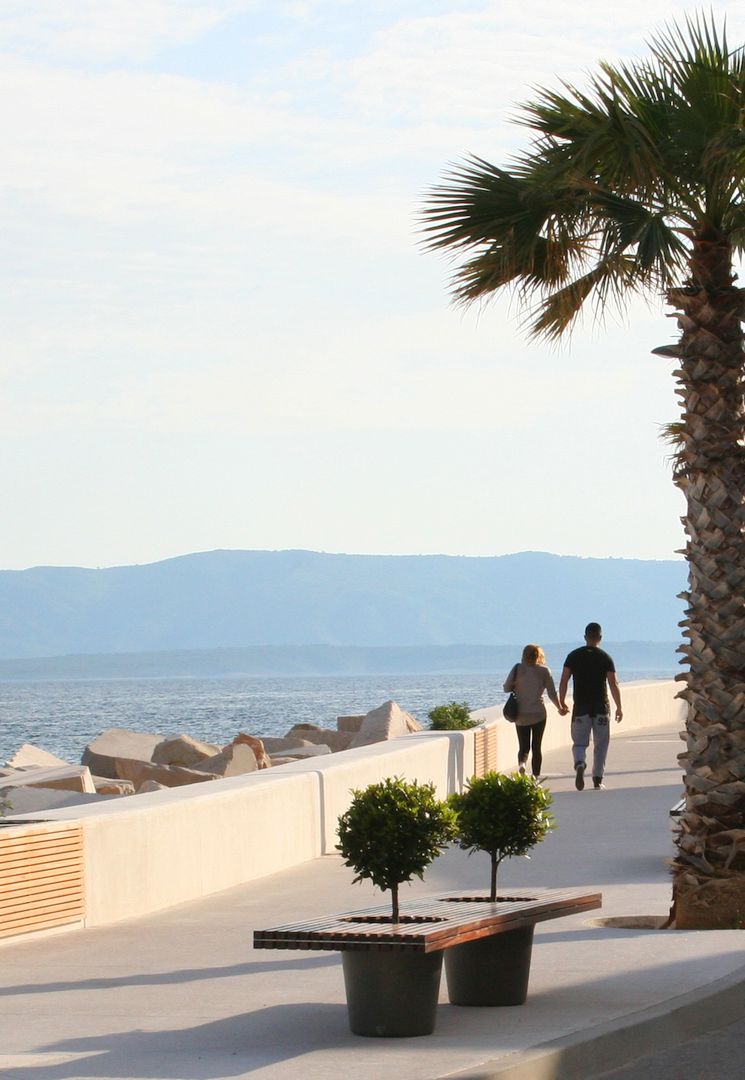